Most Christians say that it doesn’t matter whether the Savior was [is] a Jew, Arab, African, or European but it does matter-it matters a lot because knowing the background of the messiah will help us to understand his life and teachings accurately. How can we live like the savior if we have no knowledge of how he lived his life and what he taught his early Jewish disciples? 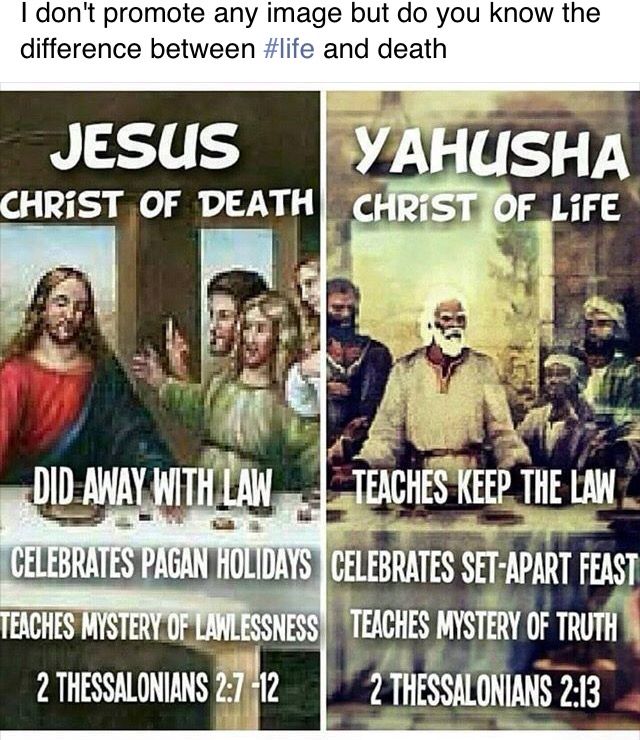 It’s obvious that Christianity is trying to conceal the Jewishness of the savior to project a lawless Gentile savior and powerless religion that will encourage sin. This started with replacing the savior’s Hebrew name from Yahshua to Jesus and that of his apostles to meaningless pagan names. Hebrew names are very powerful which is why the Hebrews name their children according to God’s divine plan and purposes; to address someone in Hebrew using his Hebrew name, is like prophesying or invoking the spirit, mission, and purposes behind his name. Christ repeatedly said “I will do whatever you ask in my name, so that the Father may be glorified in the son. If you ask me anything in my name, I will do it (John14:13-14). To the Hebrews names are of great importance, they don’t name their children insignificantly like most Westerners do. For instance, let’s consider some of the names changed in the bible and the reason behind them; Joshua [a disciple of Moses] was called Oshea but Moses changed his name to Yeshua, which means ‘ADONAI saves’ (Numbers13:16). Changing his name from Oshea to Yeshua revealed that ‘ADONAI will use Oshea to lead the Israelites to the promised land. But make no mistake, that was a prophetic demonstration of who the Messiah will be and what he will do for God’s people, Moses revealed his name to be Yeshua…

an angel of ADONAI appeared to him [Yosef] in a dream and said, ‘Yosef, son of David, do not be afraid to take Miryam home with you as your wife; for what has been conceived in her is from the Ruach haKodesh. She will give birth to a son, and you are to name him Yeshua, [which means ‘ADONAI saves’] because he will save his people from their sins.” Matt. 1:20,21 CJB

Also, we can see from the bible that God can change someone’s name and gave him a new name to establish a new identity. For instance, He changed the name Abram, which means “exalted father” to “Abraham,” “father of a many, “and his wife’s name from “Sarai,” “my princess,” to “Sarah,” “mother of nations” (Genesis 17:5, 15). As we know from history, the offspring of Abraham and Sarah has developed into many nations. In addition to what the Hebrews believe about name, read the following citation from Chabad;

“Names are considered very significant in Judaism. Your Jewish name is the channel by which life reaches you from Above. In fact, the Kabbalists say that when parents name a child, they experience a minor prophecy because, somehow, that child’s destiny is wrapped up in the combination of Hebrew letters that make up his or her name. The sages of the Midrash recommend that “one should name one’s child after a righteous person, for sometimes the name influences the person’s behavior and destiny” (Midrash Tanchuma, Haazinu 7).

In His article, “Name changed Game,” Raphael Poch mentioned that the Babylonian Talmud states that one of the things that can annul an evil heavenly decree is changing a person’s name. Jewish tradition teaches that a person’s name is the root cause of everything that happens to them, and one has the power to change his fate by changing his name” (Raphael Poch). A persons name is very important (Genesis 35:18), even people in the ancient world knew that there is power in a name, for instance, brain washing, mind control, and wrong governmental principles (divide and conquer/dominion and control) all originated from the ancient kingdom of Babylon. Babylonians of old had the highest level of manipulative methods to persuade their captives to conform to their wishes. For instance, when the children of Israel were taken captive to Babylon, the first thing that King Nebuchadnezzar did to the four intelligent Jewish boys was to change their original Hebrew names and give them Babylonian names, knowing that the Hebrews prophetically named their children. Daniel means “God is my Judge” but King Nebuchadnezzar changed his name to Belteshazzar, which means, “Bel will protect” (remember Bel was the god of Babylon). Hananiah means “God is gracious” but his name was changed to Shadrach meaning “Inspire of Aku”, Azariah means “God is my help” his name was changed to Abednego, which means “servant of Nego,” Mishael means “Who is like God” his name was changed to Meshach “belonging to Aku”. I Hope you noticed that King Nebuchadnezzar changed all the Hebrew names of these boys that connected to God of Israel and gave them new names that link to the false god (idols) of Babylon. The purpose of changing their names was to give them a false identity. In addition, after changing their names, the king introduced Babylonian victuals for them instead of allowing them to continue eating what the Lord had divinely commanded them to eat in the Mosaic Law. The changing of food signifies introducing a false doctrine, replacing Gods accurate revelation with human ideologies. The Israelite’s were taught to speak the Babylonian language and to wear their garments, which signify adoption of a false religion.

History has repeated itself; the real savior was a Shemitic Jewish Rabbi (Mathew 23:8). His earthly father’s name is Yosef and his mother’s name is Miriam. His original name is Yahshua, but the enemy has given him a foreign name “Jesus” when we all know that the proper English translation of Yahshua should be “Joshua” not Jesus. Even his disciples have been given Gentile names, for instance, Matisyahu, which means “gift of YHWH” has become Matthew with no clear meaning, Ya’akov (Jacob) has been renamed “James” supposedly after king James of England, from Shimon Kefa to Simon Peter, Yohanan which means “YHWH is gracious” is now John just to name a few. All of this was done to conceal the truth and develop a pure Gentile lawless and powerless religion that would replace Judaism. We must recognize the fact that Yahshua ben David, the Messiah was a pure black Hebrew, he wasn’t just “raised as a Jew” his mother was a Hebrew woman and he was knowledgeable in all Hebrew traditions and customs. Not only did Yahshua during his time understood the tradition of his Jewish people he obeyed them, Yahshua upheld the torah, except the fabricated religious rules of the Pharisees (the taka-notes), (Matthew 15:1-19). Yahshua went through b’ ri-millah (circumcision) on the eighth day like every other Jewish male child, and was given a Jewish name, not Greek, Latin or English. (Luke2:21)… To be continued