Wayne Parks has been identified to be an evangelist since the 1960’s who claims to also be a prophet according to his website.  But, my own investigation reveals him to be a local pulpit pimp who has found favor in the eyes of his black community, and has been in the game for so long that he has his blind followers wrapped around his pinky finger. Check out these stats …

Full Gospel Church of Living God, which also operates under the name Wayne Parks Ministries, is located in Fort Lauderdale, Florida. This organization primarily operates in the Pentecostal Church business / industry within the Membership Organizations sector. This organization has been operating for approximately 23 years. Full Gospel Church of Living God is estimated to generate $222,513 in annual revenues, and employs approximately 4 people at this single location.

$222,513 a year is only an estimate (and only what he reported) as his annual revenues- this does not include his many “love offerings” and expensive gifts given to him by his worshipers. A source close to Parks has stated that his church buys him a new car every year [and they are most likely paying for that million dollar house that he’s living in too].

He’s a typical Pentecostal preacher with a hyped up gospel that seduces his followers to SUBMIT TO HIM and GIVE HIM THEIR MONEY.  I’ve learned that he operates in a “circle” of  prosperity preachers/magicians such as Apostle James Brodnax and WV Grant just to name a few. He’s got a birthday party coming up, and guess what? You have to PAY if you want to celebrate with him! THAT’S RIGHT, and this seems to be the latest trend with these false prophets, etc. They are so haughty that they make those people who are under their hypnotic spell PAY TO DINE WITH THEM! 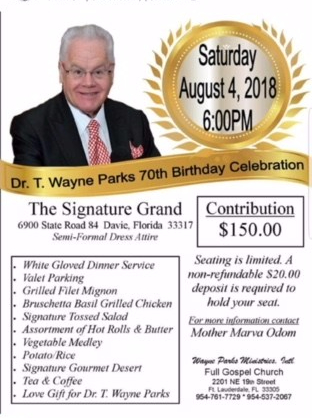 A $150.00 “Contribution” (but you can’t go if you dont make a FORCED contribution), and a “Love Gift” for Parks. I wouldn’t be surprised if the usher board handles the valet parking.  $150.00 could feed a lot of people in a third world country, heck it can provide a couple of meals and a warm room for a homeless person right here in America!

4 thoughts on “Who Is (Prophet) Dr. Tommy Wayne Parks?”